You are here: Home » News » Students stand for election!

This year two of our Abbey students, Conor Boyle 11CR, and Tom Comer 12 DC, are standing for election to the UK Youth Parliament. As a taster for things to come, both Conor and Tom gave a presentation to their class during one of their LLW lessons.

The UK Youth Parliament has over 369 seats for elected Members of the Youth Parliament, all aged 11-18 across the UK. There are 18 seats for Members in Northern Ireland, one in each of the Westminster constituencies. Our school has registered as a polling station so our Abbey students can vote in the elections.

On Monday 26th February voting goes live when you can read both Conor and Tom’s election manifestos. Voting closes on Friday 9th March and the results will be announced on Wednesday 14th March.

We wish Conor and Tom the best of luck! 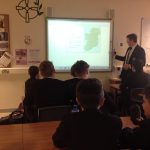 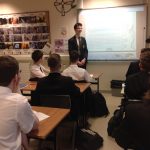