You are here: Home » Departments » English

In January of this year the Abbey English Department organised a Careers week. As part of this initiative five past pupils were invited to speak to classes about how the role of English had influenced and enhanced their chosen career paths.
On Monday 17th January, Donal O’Neill, a final year English and Politics student at Queen’s spoke to classes about his reasons for choosing English at A Level. Donal was keen to point out that no matter what your career path is the study of A Level English is of great benefit in terms of enhancing critical thinking skills and improving written and oral communication. Donal, himself, was a keen debater whilst at the Abbey and since going to university has self-funded two trips to Africa and a trip to South America. He hopes to complete a placement at Channel 4 next year when he begins his Master’s Degree in Journalism.

Other visitors during the Careers focus included Mark McGivern, Donal McMahon, Cormac Campbell and Conan Fegan. Mark is currently involved in HR at local company, First Derivatives. He has worked there for a few years having worked abroad for a Spanish communications company. A graduate of Saint Andrew’s University, Mark was able to regale pupils about his encounters with political leaders such as Hugo Chavis and Nelson Mandela as well as telling them about the safety training he took before working in war-torn areas.

Both Donal McMahon and Cormac Campbell work for The Newry Reporter. Cormac also works on the sports section of The Irish News. Pupils were fascinated to learn about the paths they took  into journalism and to hear details about local interest stories and what it was like for Cormac to interview Carl Frampton and members of Spain’s World Cup winning team.

Conan Fegan was our last visitor of the week. A barrister, Conan left the Abbey in 1998. Despite opportunities shrinking for those pupils interested in Law a significant number of pupils were interested to hear his story and to get advice.

On Thursday 26th September 2014 our  Abbey 7th year English Literature class headed off to The Market Place, a theatre in the cathedral city of Armagh. Assembling outside the school the twelve Abbey students were intrigued to witness ‘The Butcher Boy’ in performance, yet slightly unaware of how the production would pan out and how well, our ticket money was spent.

Upon arrival at the Market Place Theatre we saw a very modern building with a comfortable sitting area that helped us recover from the bumpy journey. Then proceeding to our well-chosen centre row seats on the first floor, the lights rose and the play began. The main protagonists were played by Patrick McBreaghty and Stefan Dunbar who created a powerfully evocative and rewarding theatre experience.

The Butcher Boy, the novel based on this play’s title,  is about a young man called Francie Brady growing up as an underclass citizen in a dysfunctional family. This situation helps to shape  his own psychotic problems in later life, as he retreats into a violent fantasy world as his troubled home life collapses. Based in a small rural Irish town in Ireland in the 1960’s, the story begins with the audience learning of Francie’s familial chaos from the onset. Francie’s mother is abused by her husband, the drunkard Benny, verbally and physically, resulting in her attempted suicide and long stays in a local mental institution.  Francie does not want to countenance this situation and apportion blame to the behaviour of his parents.  Instead he directs his anger towards Philip and Mrs Nugent, neighbours who have recently returned from England. Mrs Nugent, who occupies the upper echelons of the community’s social hierarchy, tramples on Francie’s happiness and often refers to Francie and his family members as pigs (hence the play’s title). One of the few saving graces for Francie is his friendship with Joe Purcell, fellow adventurer, comics lover and blood brother. However, Joe’s growing camaraderie with Philip complicates things for Francie. The ‘functional’, successful Nugent family soon becomes the focus of the Francie’s adolescent rage. The Nugents represent everything that Francie has missed out on whilst growing up, and he blames them for his own miserable situation.

Francie’s advancement from adolescent teen to adulthood is tainted by mistakes, tragedy and death. He  is placed in a mental institution himself after breaking into Mrs Nugent’s house. The erosion of his friendship with Joe leads to a decrease in self-control in his mentally fragmented character. His mental state is further crippled when he is abused by priests. On leaving his spell of ‘rehabilitation’ he discovers that he has no family life to return to. He runs away from home, his mother takes her own life and when Francie returns he has an alcoholic father to look after. Francie temporarily works in a pig factory and whilst there concocts an idea for the permanent  removal of Mrs Nugent from town life.

Patrick McBreaghty gives a dynamic performance in the play, presenting a wide range of roles including the narrator, Mrs Nugent, Phil Nugent, Benny and his mother. Although his character alters continuously the repertoire of accents he uses is very impressive, adding a very subtle professionalism to the whole play. In stark contrast, Stefan Dunbar focuses on his characterisation of Francie with such energy, exuberance and passion the audience were nearly as tired as he was come the finale.

Much credit must be given for the intricate staging of the play as it occurs in one confined space with everyday objects transformed into important accessories. This was seen when one of the characters lifted a coat hanger and turned it upside down to be used as a bicycle to cycle across stage. The minimalist set meant that the audience had to suspend their disbelief as much as possible for the production to work.

In summation, each member of the Abbey group came away invigorated by this inventive spectacle; an experience which ignited our imaginations and enthusiasm. The play was laced with dark humour and perceptively captured the fine web of childhood that so often is filled with wonder, excitement and often dark and tragic events.
Our gratitude to Mr McMahon and Mr Morgan for organising the event.
By Cathair McKinney and Conor McCann 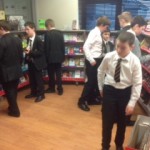 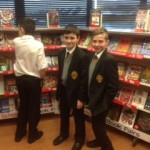 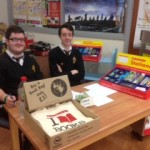 Enterprise pupils from KS4 manning the desk at our Book Fair in the school Library.

The Sentinus Research Academy gives students the opportunity to experience real research and development projects, hosted by local companies and…

Creativity & expression thrive in the Abbey

During Lockdown Ulster Schools GAA and Danske Bank ran a series of skills challenges for pupils to attempt. The challenges…