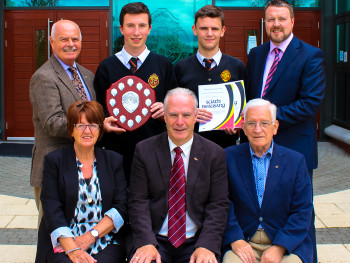 In recognition of their respect and affection for the late Br. Beausang, the local branch of Conradh na Gaeilge (Craobh an Iúir) first presented a perpetual trophy to the Irish Department in the Abbey Grammar school back in 2001.  The ‘shield’ is awarded annually to the top oral student in sixth form.

This is the fifteenth year for the trophy to be presented and this year’s award is being jointly presented to Rónán Lavery and Michael Jordan. The trophy is presented together with a cheque for £200. Both Rónán and Michael have recently returned from Coláiste Gael-Linn, Machaire Rabhartaigh having spent three weeks perfecting their spoken Irish.

The Abbey are extremely grateful to Craobh an Iúir for their continual support and commitment for the Irish Language in the Abbey as they keep the memory and legacy of Br. Beausang alive.  Included in the picture are Mr Séamus MacDháibhéid, Seoirse Ó Dufaigh, Celine Bn. Uí Fhiacháin (Conradh na Gaeilge), Mr Dessie Tennyson, Head of Irish, and Mr Dermot McGovern, Principal.