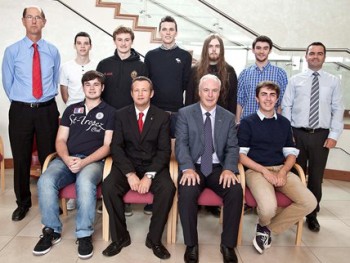 The Abbey Christian Brothers’ Grammar School, Newry is celebrating yet another exceptional set of A-Level results.

The most significant statistic from these results is that more pupils at the Abbey are obtaining the top grades. Almost 50% of all results were grade A, 76% were grades A*, A or B and 93% grades A*-C.

Another highlight for the ‘Class of 2013’ is that this years results have matched last years outstanding success, which was highlighted recently in the national media, where The Abbey Grammar was listed in the top 30 schools, as the top boys Grammar School in Northern Ireland with 86% of pupils achieving three or more A Levels at grades A*-C.

Seven pupils achieved at least 4 ‘A’ grades. Declan Garvey obtained an outstanding 4 A* grades. Matt Kinsella obtained 3 A* grades, 1 A grade and also an A grade at AS. Cailum Finnegan and Cathal Murphy obtained 2 A* grades and 2 A grades each.

Bryan Murphy and Mark Rafferty obtained 1 A* grade and 3 A grades each. Kieran McKevitt obtained 4 A grades.

Mr Dermot McGovern, Headmaster congratulated this exceptional group on their results. He indicated that virtually every boy achieved his first choice university place. He was also delighted with the Lower Sixth performance in their AS examinations as they now have the potential to outperform this years A-Level results next year. He paid tribute to his hard working staff, both teaching and support staff and thanked them for all their efforts and dedication to the welfare of their students. He also acknowledged the strong school-parental links that helped the boys to achieve their best.