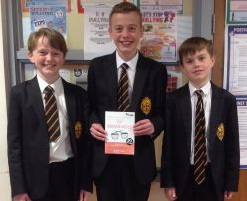 The Secret Diary of Adrian Mole is a play based on the book of the same name. Overall it’s a fairly faithful adaption until the latter half where large parts were removed for time constraints. The story is about an adolescent boy called Adrian Mole and his struggles throughout life. One of the biggest changes was making it into a musical and apart from the opening song, about the ‘80’s, all of them were forgettable. One of the play’s strongest points is its comedy; every joke hits hard and the physical comedy hit even harder. The characters were all very memorable, but the limited number of actors made them hard to distinguish, especially at the start. They used their limited amount of budget, props and actors to their advantage, with most props being cleverly recycled throughout the whole show. Overall it was a good, light-hearted and funny play that I definitely would recommend. 9/10.

Some of the Yr9 students who attended the theatre are pictured holding a copy of the programme. 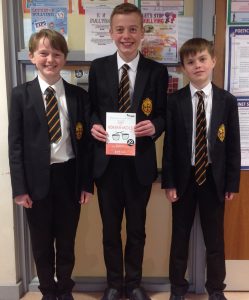 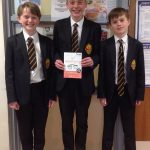