You are here: Home » News » Abbey Win All Stars 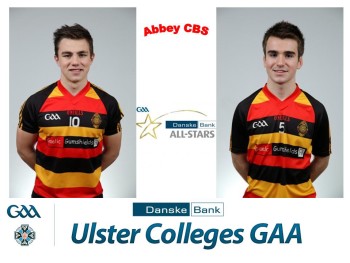 Congratulations to Conor Doyle and Donagh McAleenan on bringing honour to the school and gaining a prestigious Ulster Colleges’ All Star award.

The launch took place at the Merchant Hotel, Belfast on Monday.

During his time in Abbey CBS, Donagh has captained school teams at every level and collected a Martin O’Farrell medal and a runners-up medal in the Rannafast Cup 2012.

With Warrenpoint he has won both the Down minor and Under 21 championship and he has represented Down at minor level for the past two seasons.

He is a nephew of Down All-Ireland winner Colm McAlarney and also of well-respected GAA coach Barney McAleenan.

Conor won a Martin O’Farrell Cup medal and with St Mark’s Warrenpoint won 2 Down championship titles.  He has represented his county at minor level for the past two seasons.

With St Brónagh’s he recently won a Down minor medal to add to similar medals at under 14 and under 16 levels.

Conor is also a keen golfer.