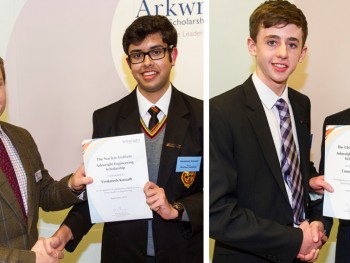 Conor McAvoy and Venkatesh Kamath from the Abbey Christian Brothers Grammar School were awarded the sought-after Arkwright Engineering Scholarships recently at a ceremony in Glasgow hosted by the Institution of Engineering & Technology and sponsored by the Rail Industry, led by Network Rail, Carillion and Colas Rail. Venkatesh and Conor were presented with their Arkwright Scholarship by Principal Guest Hugh Gill, Chief Technology Officer of Touch Bionics and a member of the Scottish Engineering Hall of Fame with 14 patents to his name.  Conor and Venkatesh are sponsored by the Ulster University and The Nuclear Institute, their Scholarship will run for the next two years. The

The Arkwright Engineering Scholarships support young people from across the UK who have the potential to be industry’s future leaders in engineering. This scheme has been run in the Abbey CBS by Mr T Mooney (Head of Technology) for the last three years. During this time the students have excelled with an incredible ten Abbey pupils becoming Arkwright Scholars. During their A Level studies, Scholars receive £600 to support their technical courses and have access to a range of exciting opportunities to learn more about engineering, such as mentoring and company visits. The Abbey CBS Technology Department also receives £400 per Scholarship awarded to their students.

Scholars are selected following a rigorous selection process comprising a detailed application form supported by a teacher’s reference, a two-hour aptitude exam and an interview hosted at a top engineering university. From a pool of 30,000 eligible students, this year teachers endorsed the applications of 1559 students. 397 Scholarships were eventually awarded.

Dr Martin Thomas, Chief Executive of the Arkwright Scholarships Trust said: “I have been hugely impressed by the creativity, technical skills and leadership prowess of the young men and women receiving their Scholarships this year. The country needs 100,000s of new engineers to take the economy and society forward. But some of these newly-trained people need to also act as outstanding leadership beacons within industry and academia. The Arkwright Engineering Scholarships are the first step on that road to achieving such a vital position within the UK engineering profession.

Congratulations to Conor & Venkatesh and all of our new Scholars!”