You are here: Home » News » Abbey Awarded Football All Star 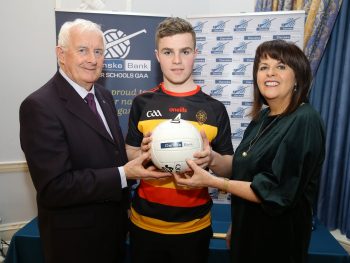 Players are selected over the course of two trial games, after being initially nominated by their own school to attend the trials.

The scheme rewards excellence in skill and in sportsmanship and a player who has been sent off in any game between September 1st and the dates of the trials is ineligible for selection.

Paul is vice-captain of the school MacRory Cup team that knocked out last year’s finalists St Mary’s Magherafelt at the start of December. He has represented Armagh at under-age level through minors to the under 20 panel that reached the 2018 Ulster final.
Paul has captained his club teams at different age levels and won an Armagh under 14 championship and minor league.
In overall terms, there is no change in the top places of the leader-board for awards won over the past 31 years.  Abbey CBS have won  48 football awards over that period.