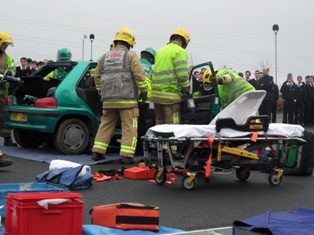 Sixth and Seventh Year pupils from both the Abbey and the Sacred Heart Grammar School, took part in a road accident demonstration as part of Northern Ireland Road Safety week. Members of the Northern Ireland Fire and Rescue Service, the Police Service of Northern Ireland and the Ambulance Service came to the school on Thursday 22nd November 2012, to target young drivers with their hard hitting campaign.

The afternoon long session got underway with a demonstration in the school yard of how the Emergency Services respond to a road accident. Seventh Year pupils, Oisín Mc Evoy and Jonathan O Hare, agreed to sit in the vehicle as the members of the Fire Service cut them out of a car. The demonstration was thought-provoking for the increasing number of young drivers attending both schools as they got to see and hear, at first hand, the sights and sounds of a road accident. Following the demonstration, pupils were given the opportunity to quiz the experts, as well as watch a power point presentation, that highlighted to them the dangers of motoring at such as young age. It was clear that the pupils we given food for thought, during the afternoon and it is hoped that they will have taken serious heed to the warnings issued by the experts during this worthwhile event.