You are here: Home » News » Opening of Abbey Grammar 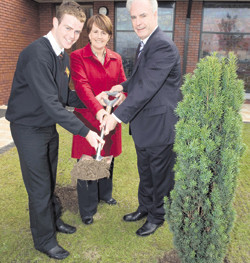 The school has relocated to a new building, which is the result of an investment of over £20million, after over 150 years on its previous site in Newry.

Speaking at the official opening event, the Minister said: “Over recent years, the Department of Education has invested enormous amounts of public money in the re-building and modernisation of Abbey Christian Brothers School in Newry. This school and the community it serves have the right to modern, educational facilities and are absolutely entitled to the allocated funding. As Education Minister, I recognise and defend that right. However, the right to draw down large amounts of public investment carries with it responsibilities, including the responsibility to play a full and willing part in meeting the needs of all children in this community, not just the academically gifted and able.