You are here: Home » News » Most Fluent Irish Speakers 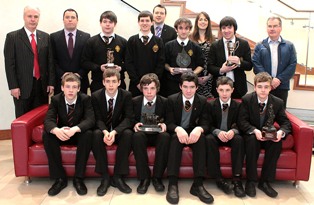 Annual Abbey oral awards for the most fluent speakers of Irish

Irish 120312
Pictured here are the members of the Irish department in the Abbey Christian Brothers’ Grammar School, Mr. Maurice Mc Kevitt, Mr. Sean Gallagher, Mrs Pauline McClean and Mr. Desmond Tennyson with the winners of the annual Abbey oral awards for the most fluent speakers of Irish in each year group. Also in the photograph is the Principal, Mr Dermot McGovern.

The second year trophy (Méabh agus an Donn Chuailgne) dedicated to the late Mr. Patrick Arthur Crinion, a former teacher of Irish and the Classics, was awarded to Ronan Reel.

The third year trophy (Corn Durkin) dedicated to the late Matt Durkin was jointly awarded to Joseph McKeown and Niall Rafferty. Following the sudden and unexpected death of this former Abbey student, his classmates decided to present an award to the school in his memory. Ever since, it has been presented annually to the best Gaeilgeoirí in third year and indeed it lead to the decision to present similar awards to each of the other year groups.

The fourth year trophy (Clann Lir) dedicated to Brother Aidan Quinlan, who during his time in the Abbey was a founder member of Féile Scoildrámaíochta an Iúir, was jointly awarded to Peter Reel and Aodhán Gregory.

The fifth year trophy (Bás Chúchulainn) dedicated to the late Brother W. O. Murphy, former Head of Irish and Vice-Principal of the Abbey, was jointly awarded to Sheá Hanratty and Lee Ruddy.

The sixth year trophy (An Lóchrann) dedicated to Mr. Hugh Murphy, Lislea poet and former Head of Irish, was awarded to Connor Hogan.
The award for the best ‘Gaelscoláire’(An Lóchrann Beag), was jointly awarded to Ger Feehan and Cormac Donnelly.