You are here: Home » News » Miss Saigon To Premiere at Abbey

Miss Saigon To Premiere at Abbey 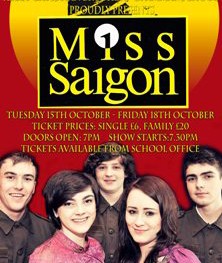 Rehearsals are in full swing for the Irish Schools’ premiere of Boublil and Schonberg’s, Miss Saigon., at the Abbey Christian Brothers’ Grammar School, Newry. A truly magnificent cast has been assembled and the Abbey is buzzing with anticipation as the opening night draws near. The school has opted for this very challenging production as it is one of the last major West End shows to be made available for school performance. Miss Saigon is without question one of the most dramatic theatrical shows with arguably a musical score to rival that of West Side Story.

This is a unique opportunity to see the modern classic as the rights have been withdrawn due to the fact that Cameron Mackintosh’s acclaimed new production is making its highly anticipated return to the West End next year. Since Miss Saigon’s record breaking run at London’s Theatre Royal Drury Lane 25 years ago it has played in 300 cities in 15 different languages. This epic love story tells the tragic tale of a young bar girl Kim, orphaned by war, who falls in love with an American GI called Chris-but their lives are torn apart by the fall of Saigon. Do not miss this rare chance to experience something truly wonderful and so different from other shows.

Book your tickets from the school now before it is too late!