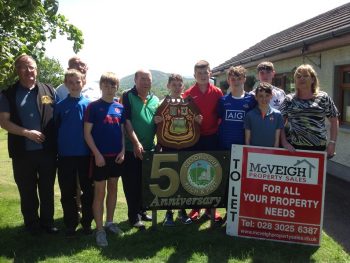 On Friday May 26th Cloghogue Pitch and Putt club hosted a schools’ golf competition to celebrate their 50th anniversary. Several local schools took part in this inaugural competition and the Abbey were the eventual overall winners.

Each student was sent out with students from 2 other schools and the best 5 scores from each school combined to produce the overall winner. The Abbey took the title with St. Joseph’s Crossmaglen finishing runner-up.

The boys also produced the top 3 individual scores which was particularly impressive on a challenging and testing course. For many of them it was their first outing on the Cloghogue greens.

Pictured is Ethan Patterson receiving the trophy from Colin Bell from the KBRT. Ethan was the top individual scorer with Eoin Fegan second and Eoin Reel third. The other members of the team were Joe Connolly, Harry Price, Callum Small and Michael Colhoun.

The school wishes to thank Cloghogue Pitch and Putt club for hosting the event and making everyone feel very welcome. 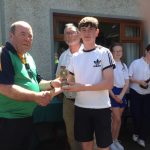 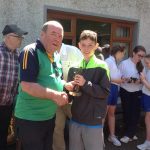 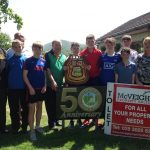