You are here: Home » News » James Crowned U16 Irish Champion 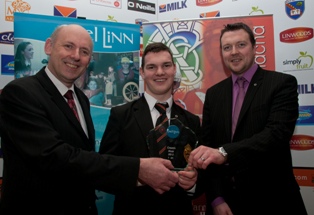 James Meehan in Year 12 was crowned U16 Irish Public Speaking Champion on Friday 30th April 2012 in the Ulster Final at Morgan Athletic Grounds in Armagh. Gael-Linn’s prestigious public speaking competition ‘Abair’ on Friday witnessed the highest standard in the competition for a number of years. Students from across the North of Ireland, Monaghan and Donegal impressed the judges with their wide range of topics and varying styles of delivery. Andrew McAteer, a Year 11 student, opened the competition with his speech on the Olympic Games in London 2012. The judges felt that James Meehan, who came second in the competition last year, was worthy of the award as he presented a satirical speech on ‘Lent and Nomophobia’.

Connor Hogan, last year’s U18 winner, spoke about ‘Fracking’ in the senior section in an extremely competitive section with his own personalised brand of public speaking that Gael-Linn competitions have come to expect.
‘Comhghairdeas’ to the three Abbey students for reaching the final and many congratulations to James on his success.