You are here: Home » News » EXCELLENT SET OF A LEVEL RESULTS

EXCELLENT SET OF A LEVEL RESULTS 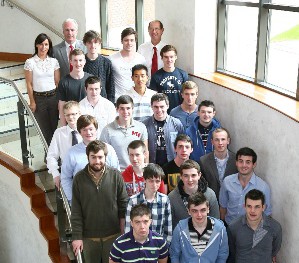 The Abbey Christian Brothers’ Grammar School, Newry is celebrating yet another exceptional set of A-Level results.

A highlight for the ‘Class of 2012’ is that a quarter of Upper Sixth achieved at least one A* grade. The examining boards introduced this new level recently to acknowledge ‘super A grades’. Candidates must achieve 90% in their A2 exams to be awarded this. As competition for ‘high demand’ university courses rise, candidates are under pressure to meet third level offers. With 10% of total grades being A*, Abbey pupils have continued to obtain their first choice university course.

Mr Dermot McGovern, Headmaster, congratulated this exceptional group on their results. He indicated that virtually every boy achieved his first choice university place. He was also delighted with the Lower Sixth performance in their AS examinations as they now have the potential to outperform this year’s A-Level results next year. He paid tribute to his hard working staff, both teaching and support staff and thanked them for all their efforts and dedication to the welfare of their students. He also acknowledged the strong school-parental links that helped the boys to achieve their best.