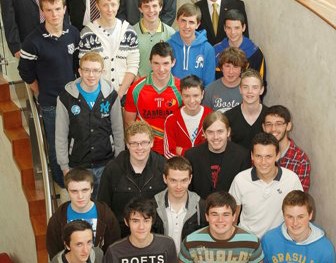 Fifth year students at the Abbey Christian Brothers’ Grammar School, Newry learned that they have created their own little piece of history when they received their GCSE results last week. This group have achieved a new record for the greatest number of students obtaining 5 or more passes and 7 or more passes for the whole year group. 100% achieved five or more A*-C grades. The number of pupils who achieved seven or more A*-C grades has increased to 96%.

A delighted Headmaster, Mr Dermot McGovern, thanked staff and parents and congratulated all the students who received GCSE results – not only the boys who had done exceptionally well but also the boys who had done as well as they possibly could. He believes that a number of factors have combined to help with this year’s success, including a very dedicated, committed and highly professional staff who got the best out of this year group. The most valuable gift any teacher can give a pupil in the Abbey is their own time and this was given in abundance.

Support from parents was another area highlighted by Mr McGovern that facilitated these results, working in harmony with the Abbey by attending Parent/Teacher meetings and helping to implement recommendations that were agreed at ‘Progress Meetings’ that were set up to support students.

Pupil’s in Year 11 have also performed very well after completing numerous GCSE examinations following their first year of study and can look forward to matching this years GCSE results next year.