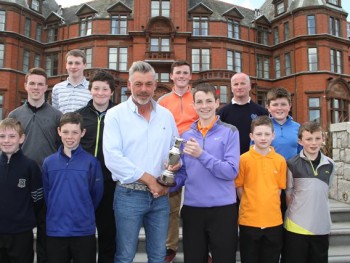 Lisburn Golf Club was the venue for this year’s Darren Clarke Schools’ Golf League final. Abbey CBS booked their place in the final after overcoming Omagh CBS in a tight semi-final game. Awaiting them there were St. Malachy’s College, Belfast.

Despite the weather fluctuating between hailstones, sunshine and blustery winds, the standard of golf was very impressive at times. The first 3 games all went to at least the 16th green with the Abbey winning 2.5 points out of 3 thanks to some excellent golf from Lewis Cowan, Ruairi McCormack and John Dunne. Vincent Toner, who had a great win in the semi-final, came up against an opponent who chipped in twice for birdie in the opening 4 holes and was unplayable on the day. Once again it came down to the young players at the tail end of the order. Ethan Patterson, Sean Rock and Eoin Reel have been very consistent performers throughout the competition, contributing 7.5 points out of a possible 9 in the last 3 rounds. It was perhaps fitting that Eoin was the player to sink the winning putt, not only maintaining his 100% record in the competition but also to secure the title for the Abbey for the first time.