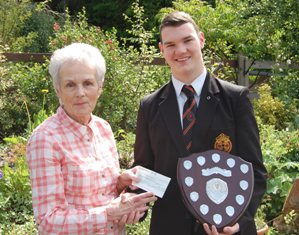 In recognition of their respect and affection for the late Br. Beausang, the local branch of Conradh na Gaeilge (Craobh an Iúir) presented a perpetual trophy to the Irish Department in the Abbey Grammar school which is awarded annually to the top oral student in sixth form.

This is the tenth and final year for the trophy to be presented and this year’s recipient was James Meehan. The trophy was presented together with a cheque for £200 by Margaret Comer on behalf of Conradh na Gaeilge, to go towards a three week course in the Donegal Gaeltacht and James attended Gael-Linn’s College in Machaire Rabhartaigh. The first winner of Sciath an Br. Beausang was Antaine Ó Cuaig (RIP), followed by Seán Ó Cearbhaill in 2002, Diarmaid Ó Diolúin in 2003 Macdara Ó Graham in 2004, Seán Mac Labhraí in 2005, Pádraig Ó Tiarnaigh 2006, Pilib MacLabhraí 2007, Deaglán Mag Aoidh 2008 and Seán MacCathmhaoil, 2009, Cian Gallagher 2010 and Connor Hogan who sat his A level examinations in the Summer received this prestigious award last year.