You are here: Home » News » Abbey students make their mark! 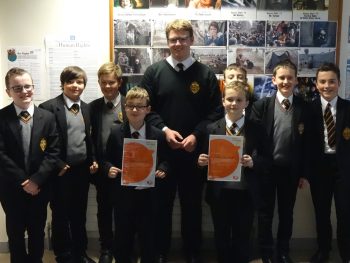 All Abbey students in Yrs 8-12 LLW classes recently participated in The Make Your Mark Campaign which, following a nationwide consultation, declared climate change as the biggest priority for young people across the UK. The Make Your Mark campaign, which was sponsored by Fledglink, called on young people aged 11-18 to choose which issue they felt was a priority.

The ballot has seen more than 825,000 young people take part, maintaining the campaign as one of the largest consultations of young people in UK history. The five issues that have been prioritised are:

Knife crime was voted the most important issue for young people in 2018, and remains a critical issue as knife crime hits a new record high. Members of Youth Parliament have been campaigning on knife crime throughout 2019, calling on the Government to take urgent action.

Conor Boyle, a 6th year student, pictured in the photos presenting certificates of participation to a number of students, was elected to the UKYP recently and continues to lobby and argue on behalf of young people on a range of important issues.