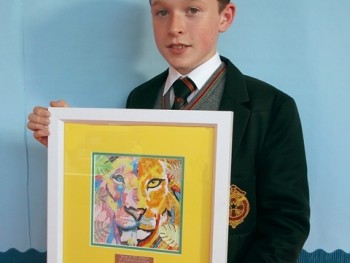 Huge congratulations to Art and Design student Tiernan Caulfield Yr 11 who came first in the Fiddler’s Green Art Competition. Tiernan was awarded the Jim Mc Sherry plaque and had his winning art work professionally framed. In addition Tiernan was presented with a framed certificate and a £30 Eason’s voucher. The judge Killian McEvoy was so impressed by Tiernan’s efforts that he has invited him to exhibit alongside him in Newry Library in June 2016. Fantastic achievement Tiernan! Well done!!